Ragus’ sugar story: how our 90-year heritage informs our practices

Ragus have over ninety years of knowledge and experience, so where did it all begin? Here we trace back Ragus’ story from the beginning to today.

The inspiration behind Ragus, 1880s

Between the 1740s and the 1820s, sugar was Britain’s most valuable import. As sugar became ubiquitous in British life, its potential for new products and new business captured the imagination of our founding fathers, the chemists and brothers, John and Charles Eastick. Consequently, in 1880 they established a sugar consulting practice in the heart of Victorian London.

Within two years their ground-breaking work and product innovation caught attention throughout the city. So much so that Abram Lyle, a business owner and entrepreneur, invited our founding fathers to set up a laboratory at his Plaistow refinery.

However, the following year the British sugar industry was shaken by shortage as cargo ships importing raw cane sugar were restricted in the capital. With the demand for the sweet crystalline higher than ever before, Charles used the shortfall as an opportunity to experiment with sugar run-off product from the refining process. The resulting invention was golden syrup.

The golden elixir was an instant hit in the British market – and is now the oldest branded food product in the world – and by 1885 it was being stored in its renowned metal tins, something that has continued to this day.

After the triumph of golden syrup, our founding fathers decided it was time to expand their passion beyond the chemistry of sugar and branched out into manufacturing and consulting. In 1890 John emigrated to Australia to manage Bundaberg’s sugar production – the largest sugar producer in Australia – and Charles moved to the Martineau sugar refinery in central London, where he became managing director.

As the First World War commenced, Charles focused on helping the war effort. Such was the popularity of sugar that Charles became responsible for administering the UK wartime sugar rationing quotas, and his services were of such value to the nation, that he was awarded an MBE.

Come the end of war and sugar was as popular as ever before, with the industry dominated by the UK’s largest sugar refineries. But by this point, John had returned to London, and our founding fathers had gained approval for eleven sugar refining patents which would allow them to set themselves apart from the major players. 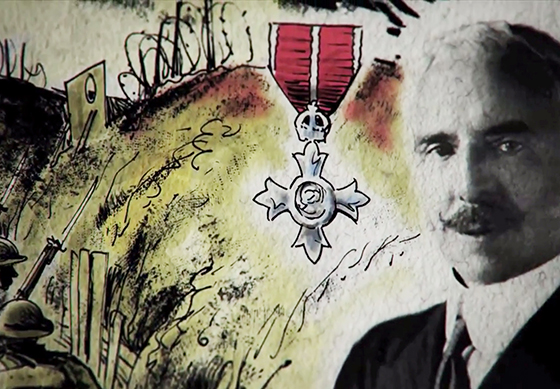 Charles was awarded an MBE for his efforts throughout the war.

Therefore, in 1928 Charles oversaw the building of a syrup production factory in Slough, where he continued to manufacture specialised sugars such as golden syrup, inverted sugars and fruit cordial syrups for confectioners, bakers and brewers. The application of inverted sugar was a particularly innovative concept, and quickly became popular in the British market. This was the birth of the Ragus we know today and is how the company derived its name; Ragus is sugar inverted.

However, as the Second World War took hold of British life, the nation was once again struck by shortages, including almost no access to fruit, which was a vital production material in Ragus’ cordial syrups. Rather than admitting defeat, though, our founding fathers used this challenge as a platform for innovation, creating a honey alternative made from crystallised golden syrup, which was popular through the war and beyond.

Following the end of war, and subsequently, the end of rationing, demand for sugar surged again. Charles’ grandsons, Barrington and Ronald, took over the company and continued to pursue their grandfather’s innovation, expanding the company across new horizons by forming a new market: using sugar as a winter energy food in animal feed.

Charles passed his business and legacy onto his ancestors.

This period saw Ragus’ workforce double by 1970, owing to the demand of their new products. Alongside syrups and inverted sugars, they had started to produce raw cane sugar which sold in large quantities, as well as celebrating Ragus’ status as the UK’s last independent sugar producer.

But the end of this chapter came in 1990, when Ronald and Barrington retired and passed the baton onto Charles Eastick’s great grandsons, James, Peter and Benjamin.

Bringing sugar into the 21st century

A changing market has meant that Ragus has stopped manufacturing sugar based animal feed, and the company now focuses explicitly on food based pure sugar products such as crystallines, syrups and custom formulations. We do this through our quality sourcing and auditing of primary production materials, our manufacturing and consulting expertise passed down through generations of Easticks, and our commitment to the highest levels of customer service in our delivering procedures.

Just as our founding fathers did before us in 1928, Ragus has overseen the building of a purpose built factory in 2013 to cope with the modern day demands of the sugar market. Indeed, the multi-million-pound state-of-the-art factory is probably far greater than anything Charles and John could have imagined. The business has expanded from a UK-based sugar producer into a full-service operation that supplies hundreds of tonnes of pure sugar to customers all over the world.

Ragus is proud of our family heritage and continues to install our founding fathers’ legacy of innovation, quality and expertise in the modern day.

Our 90-year heritage means that we are experts in sourcing, manufacturing, consulting and delivering. For more information on our pure sugar products, contact us on +44 (0)1753 575353 or sales@ragus.co.uk.